When asked what he thought his talent was, Zaid Abueisa answered “I think imagining things and making it real as simple as that…Yes I don’t like complex answers”, he said with a grin. Before asking him this question, I tried to find out my unbiased answer, now that I have been meeting with him almost weekly to discuss and prepare his upcoming artwork in the YOUNG MASTERS PROGRAM in Tunis. My answer to this question would be: His talent is his drive! Although his answer seems to be simpler, it reveals much more and adds this ability to execute his complex ideas in concentrated words and artworks.

Zaid Abueisa(*1995) is a Jordanian audiovisual artist, painter, and street art teacher. His interests come at the intersection of technology, creativity, and social integrity. Early in his academic training, he switched from IT engineering school to Fine Arts school which led him to have his current multidisciplinary art practice. He has also been working as a VJ, creating audio-reactive light visuals at nightclubs in Amman. “This allowed him to have knowledge of audio visual manipulation, mapping, and digital expertise”, says Zeineb Kaabi, a Tunisian visual artist who has worked closely with Zaid during a light art residency at the MMAG Foundation in Amman. She adds “He has potential in this area because he’s willing to try and step outside of his comfort zone while still being open to fast learning and adaptation.”. Potential was a word that I heard more than once when I had conversations about Zaid with artists and curators who were at the Amman light art residency. This residency being a first in Amman and a first in Zaid’s career, it sure has been an opportunity for him to channel his undeniable technical skills into more conceptually demanding artworks.

He is a person of his environment and he is showing it through his works. “His artworks reflect his identity and his cultural background”, as it was pointed out by Zeineb Kaabi who is mainly referring to his artwork “History Through Window”.

The artwork is a video projection in an MMAG room with particular windows and white walls. Zaid takes the outlines of the window and projects it on a white flat wall. The top of the background is a blue sky. It gives you the illusion that you are looking at a landscape of a regular clear-skyed Ammanian day except that there is a large Olive tree in the middle as a reference to his Palestinian roots. Below it, is a visual of two zoomed-in women in slight motion wearing traditional Levant clothes, an elderly man’s head in the background wearing a “Hatta” which also is a traditional Levant headwear. In such a narrow window, Zaid managed to fit so many cultural identities, kind of like Amman, a city where the boundaries of its local community are as inextricably intertwined as the identities of its inhabitants.

Although “History Through Window” takes up a small space on the big white wall, the room is filled with middle eastern tunes which create an overall mystical atmosphere, making the artwork more wholesome. The ability to provide an immersive experience gives Zaid an advantage as he can balance between sound and image with care and finesse, or as Paola Farran, a Canadian curator and artist living in Amman, says: “Zaid’s sensitivity can be witnessed in his work; he has a unique ability to convey emotion through his crafty juxtaposition of image and sound”. 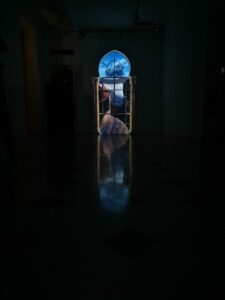 As opposed to the serenity and even clarity of this artwork, Zaid is a fan of the randomness, inspiration flow from the subconscious, and the experimentations that come from that. When I asked him what his favorite recent artwork was he sent me a link to an artwork called T69 Collapse by Aphex Twin. It starts from a pixelized image of a command terminal with binary numbers until we find ourselves witnessing a set of events of: even more pixelization, pattern layering, distortion, and emersion of shapes and forms, and colors until we are looking at random boxes and LED-lit shapes reacting to the sound accompanying the visual. Zaid likes this artwork because “it’s pure experimentation, in total neglect of the rules of esthetics, and the things we learned at Fine Arts School. He just lets things flow from his subconscious in an unruled way”, he states. Inspired by this approach, Zaid works on artworks that are experimental, and give more scope for interpretations. Similarly to his second artwork in the residency, Zaid showcases an artwork that “is flowing from his subconscious”, yet he makes it uniquely his own by making it a site-specific artwork as he takes the patterns of an old wall by MMAG and uses them for his projection. This aspect of contextualizing his artworks is one of Zaid’s assets as states Aymen Gharbi, a Tunisian curator and the curator of the Amman residency, “Zaid doesn’t limit himself to one aesthetic, and that’s working well for him since he has already been juggling the art, programming, and night light lifestyle. He stands out by creating context-specific and site-specific artworks and mixing them well with his desire to let his experimental side flow as well. 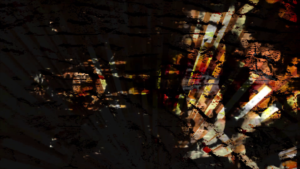 Zaid’s works can walk the line between the familiar, the rhythmed, the structured, and the experimental, the random, the fast, yet they are never alienating to the audience. The audience to him is as important as the artwork, he constantly looks for what they thought of his artwork. When asked about his favorite audience he said: “The people who take the time to think about what the artwork is saying, which can be a variation of perceptions. What I think about while doing the artwork is sometimes conveyed through it, and other times it’s not, and this changes my perception of what an artwork should and shouldn’t be and this aspect gives more room for experimentation”.

Multiple times during our meetings did Zaid bring up the idea of including the audience. He wants them to experience the artwork independently and come to their own interpretations. This altered my perspective as to how for him, conceptualizing the artwork can be a byproduct of it as well as a starting point. This process helps him to rethink his works. Thereby they are not any longer constrained solely to his experiences, research, and skills but are open for discussion. He wants his works to become a platform of exchange.

He told me “I want the audience to feel intrigued and triggered and even impacted”, a statement that opened the door to discuss what he meant by triggered and if he thought art should or does have an impact, “Yes. I think it can be a feeling, or a thought, an introspective reflection, or a decision taken when living the artwork experience, and that for me can be the trigger or the impact I aspire to lead the audience to through my work.”

This craving for exchange and communication with the audience sure puts him in a vulnerable position where he will well be judged. When asked about the best feedback he has gotten he answered “You can do better”, to which I expressed my confusion, which made him explain, “The best feedback I got was from an experienced artist who saw my work and told me that I can do better, I take that and challenge myself to learn more, experiment more, and up my game”, which brings us back to his drive. It takes so much mental resilience and determination to be the one to ignite your motivation and keep yourself going, to push yourself and put yourself out there, especially as an emerging light artist. He has mastered this ability and nurtured it with his unwavering persistence and thirst for learning, he simply enjoys being pushed, and through it, he harnesses the ability to withstand endurance and reach the pinnacle. Add to that what he said about imagining things and then realizing them, it’s that simple for him to materialize ideas quickly, start crafting, and not get lost in visualization. In fact, I first noticed this at his initial encounter with Aymen Gharbi and Bettina Pelz, the YOUNG MASTERS PROGRAM’s artistic directors. He entered the program later than the other artists, and a few days after learning about the exhibition’s theme, PHOTOSYNTHESIA, Zaid had already begun experimenting and sharing prototypes of his idea with me. It was also at this point that I became aware of his drive, which enabled him to advance so far in the creation process and to reach his creative goals in a timely manner.

It has been joyful times just looking at how Zaid can welcome vulnerability with open arms and dance around it and with it through his art. I think this article should also tell the story of a 26 years old who is healing his way in life through letting things out, letting things simmer, and trying to listen to his inside noise…in silence, as per his favorite quote by Rumi: “The quieter you become, the more you are able to hear”, which explains all those times we met and how I would see a man with paint on his hands from his days teaching street art to Syrian refugee children. And then when the day is over, he returns to his dimly lit room where he spends most of the evening experimenting, working on his visual artworks for an exhibition, or preparing for an upcoming loud night at an Ammanian bar.

“I, who enjoys working with techies who wield knowledge and research as their weapons, I sure have found in Zaid a most admirable lesson as to have faith in the “randomness of letting be,” and how to – well try to – believe that everything will work itself out in due course.